Posted on July 30, 2021
by Gregory Kopp, via The Conversation 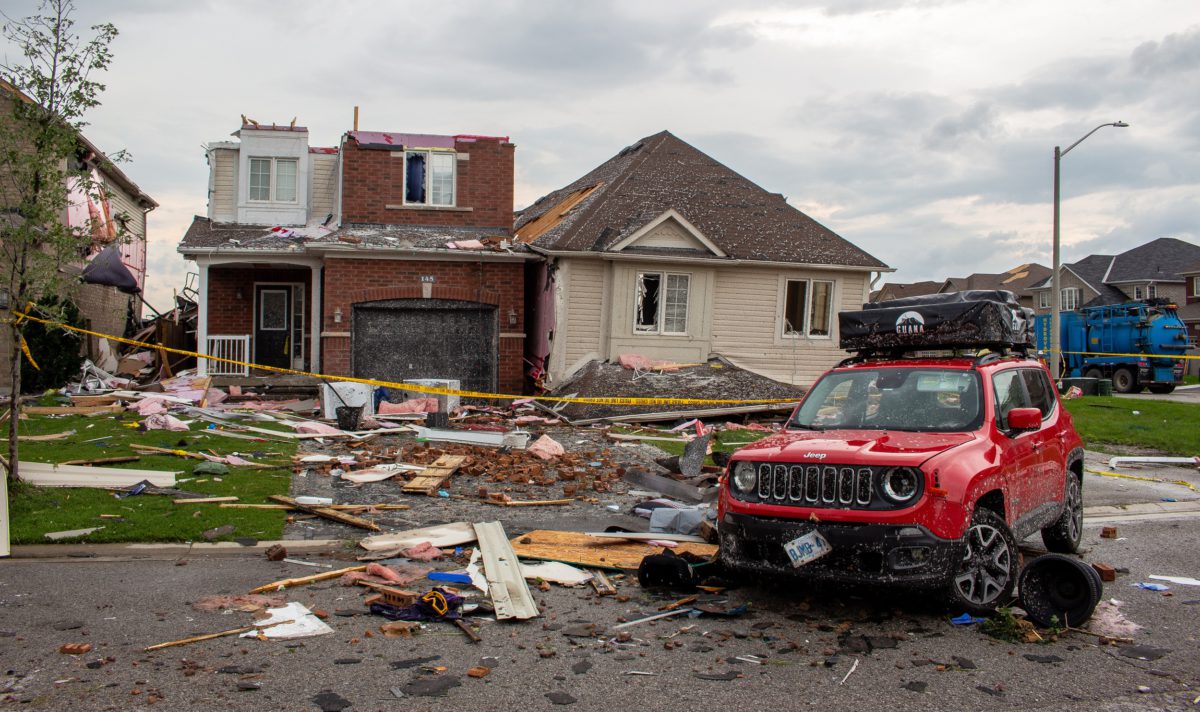 Posted on July 30, 2021
by Gregory Kopp, via The Conversation

Many people think of a well-built house as one where the walls are strong enough to hold up the roof so it won’t fall on them. This is reinforced by children’s stories like the Three Little Pigs, where the house made of brick is the strongest when the Big Bad Wolf comes to town.

When a strong tornado passes through a neighbourhood, it results in total chaos. Debris is everywhere. Shingles and siding and bricks are thrown about. Entire roofs are tossed, often landing on neighbouring homes. Walls collapse, cars are rolled and flipped. Insulation is stuck to every surface like a strange snowfall.

On July 15, a tornado struck Barrie, Ont., destroying several homes: Could anything have been done to minimize the damage in Barrie?

Holding on to the roof

In any windstorm, tornadoes included, the roof needs to be secured — this is due to the uplift, the same physics that allows an aircraft to fly. This runs counter to our intuition since we tend to think about roofs collapsing, not flying. The uplift is the main vulnerability of houses. The structure of residential roofs in Canada tend to be strong because they are designed to handle the heavy weight of snow in winter.

For the wind, which acts in the opposite direction as the snow, it is the nails connecting the trusses to the top of the wall that become critical to ensure that the roof stays in place during a severe storm.

The National Building Code of Canada requires three nails — just over three inches long — in each roof-to-wall connection. These toe nails, as they are called, are what hold the roof down in the wind. If this is done properly, the roof structure should be safe until wind speeds reach about 160 kilometres an hour. At such wind speeds, asphalt shingles may blow off but the roof structure will remain intact.

Houses are not designed for tornadoes, although the building code discusses tornadoes. The requirements for fastening the walls to the foundations were developed to deal with tornadoes. These were included in the 1995 release of the National Building Code following tragic deaths in 1984 when cottages were swept into Blue Sea Lake in Québec, along with post-storm observations following a 1985 tornado in Barrie.

It is now known that toe-nailed connections are the weak links in the structure, more likely to fail before the roof sheathing and before the walls pull apart from the foundation. Walls are more likely to collapse when the roof is gone, and the roof itself can become airborne. Both of these are threats to life and safety.

The Northern Tornadoes Project survey in the immediate aftermath of the recent tornado in Barrie indicated that several homes did not meet the building code requirements because of missing toe nails.

This is nothing new.

Similar observations were made in 2009, when tornadoes landed in Vaughan, and in 2014 in Angus.

To design for tornadoes, we need to know the wind speeds in tornadoes. These are rarely measured. Rather, tornado wind speeds are assessed through the damage they cause, via the Enhanced Fujita Scale.

The recent Barrie tornado was assessed to have had maximum wind speeds of 210 kilometres an hour based on the damage to a few of the houses. It was a strong tornado. However, if this strong tornado had instead gone through farmers’ fields, missing all buildings and trees, then it would have been assessed as an EF-0 (90-130 km/hr) tornado even though its true strength was greater. Clearly, the use of damage to estimate the tornado wind speeds is challenging, particularly in sparsely populated areas.

As a result, the reported intensity of a tornado — its maximum wind speed — depends on what it hits and, therefore, on the quality of construction. A roof with only a single toe nail would be assessed as EF-1, while properly installed toe nails yield an expected wind speed of about 195 kilometres an hour, which is EF-2.

Put another way, a wood-frame roof is expected to fail in an EF-2 tornado, while improper toe nails would lead to roof failure in an EF-1 tornado. As a result of this uncertainty, quantifying wind speeds in tornadoes is still an active topic of research and development.

Nevertheless, the combination of tornado simulators, wind tunnels that create tornado vortices to define the wind forces on buildings, and full-scale laboratory tests on houses to determine their strength has helped. They’ve provided good estimates of failure-inducing wind speeds during tornadoes under a range of conditions including that of the roof-to-wall connections.

Could anything have been done to mitigate the damage in this EF-2 tornado? In any tornado, the highest wind speeds only occur over a relatively small proportion of the total damage path. That means damage reduction measures can be quite effective in mitigating damage from the overall storm.

If all of the houses in Barrie had been built to the building code requirements, there would have been less damage overall, although there still would have been some significant damage because of its intensity.

There is a better solution: the use of hurricane straps instead of toe nails. This well-established technology, developed to deal with hurricanes, can work to keep the roof attached to the walls in tornadoes with wind speeds up to about EF-2. They are inexpensive, costing less than $200 per house to install, and are easy to inspect for compliance.

Since EF-2 and lower-rated tornadoes represent more than 95 per cent of all tornadoes, requiring straps in the building code could reduce much of the damage of these severe storms and and significantly improve safety.

While a few other things need to be done to make houses fully able to withstand EF-2 tornadoes, this adjustment would eliminate the weakest link, increasing resilience and safety by keeping the roof on the walls and stopping entire roofs from flying downwind and hitting other buildings.

Thumbnail: Some of the worst damage from the EF-2 tornado that struck the Ontario city of Barrie on July 15.(Northern Tornadoes Project) Author provided